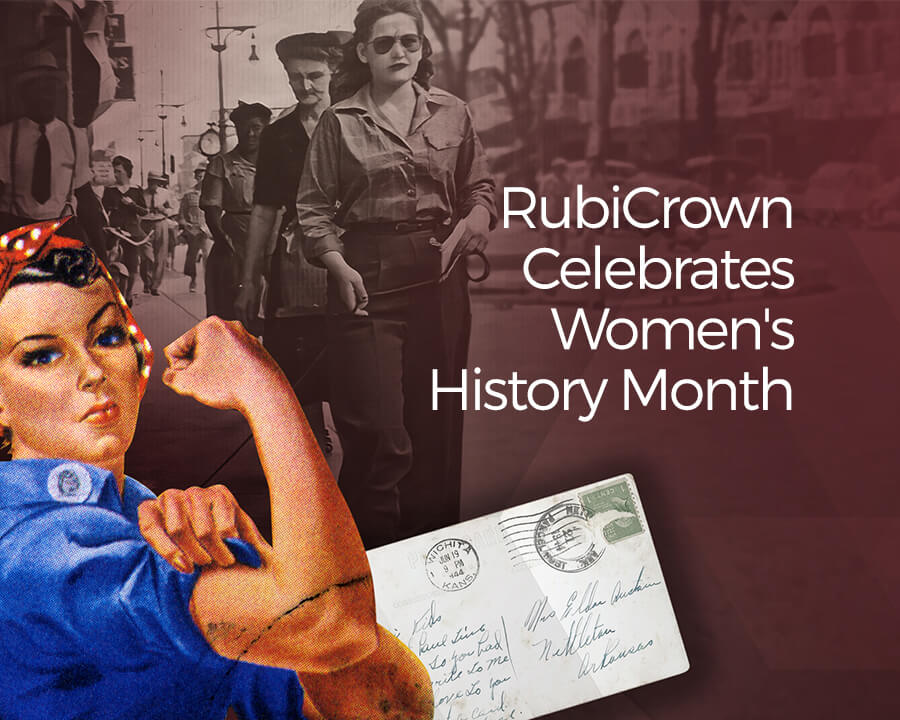 RubiCrown is a 100% woman owned company.  The following piece was written by our founder’s mother and is a tribute to our family’s very own Rosie-the-Riveter, Great Aunt Louise Ellis Haile.  Thank you to all the women who came before us and paved the way for RubiCrown to thrive.

Seventeen-year-old, Viola Louise Ellis had never dreamed of being a superhero, or an unheralded secret weapon of the second World War in 1942. She was just one of eleven poor children born into the Ellis family in the rural hills of Arkansas. These were desperate times which called for action among fearless people with grit and gumption.  With two dollars in the pocket of the worn-out jeans she had snatched from her older brother, Ray, she boarded a train with a load of strangers headed to Wichita, Kansas in hopes of getting a job at The Boeing Aircraft Company.

It was a brisk November morning when Louise pulled her heavy brown plaid wool coat around her shoulders to soothe the chills which came upon her, more from nervousness than the weather. She worried if her holey sneakers would last long enough until she was able to get paid.  Wichita was famous for its fierce winter weather and Louise had no idea where she would stay or how she would survive. Within the first few minutes on the train, she met a young couple who became instant friends.  They had secured a rental apartment in the basement of a home near Boeing. As the friendships developed on the trip, the couple offered to allow Louise to stay with them for a few days until she could get a place of her own.  A warm sigh of relief washed over her as she began to calm down.

The basement was damp and cold.  The overstuffed floral sofa was lumpy and smelled of mold and mildew but it was a place for Louise to lay her head and rest.  As her new friend began to complain about the cold, Louise offered her the coat off her back as partial payment for her generosity and hospitality.  Tucked away in her bag, was an old tattered and torn brown bomber jacket that had belonged to one of her brothers. She prayed for a mild winter but regardless, she was a survivor. Everything was working out so far.

Louise bought a bag of oranges with the plan of eating just one a day until she could get paid.  Occasionally, she would get a piece of bologna or a slice of bread from her roommates.  If she could pass the training, she would be paid fifty cents per hour as she learned to be a riveter. Louise was no stranger to hard work.  Everyone in her family back home on the farm had to pull his or her own weight in order to survive.

Punching holes into large sheets of sheet metal wasn’t easy and it had to be done right.  The holes couldn’t be too large or too small.  The job called for accuracy and precision as the lives of American servicemen flying these planes were virtually in her hands.  Louise perched up on a high catwalk was responsible for riveting the cover onto the belly of a B-29 Bomber, later known as the B-29 Superfortress.

Pay day came at last.  The first two weeks were behind her and she rewarded herself with a huge meal.  She later told her sister, Wanda how she became violently ill after overloading her stomach. All that rich food was a shock to her system.

The weeks turned into months. Louise was proud of the job she was doing. But like it says in Proverbs 16:18 “Pride goes before the fall…” Louise’s supervisor yelled at her to come down from the platform where she was working. The boss wanted to see her in the office.  Her heart was in her throat as she trembled thinking she was about to get fired.  She questioned, what on earth could she have done? Management had noticed Louise was only seventeen years of age.  According to the labor laws one must be at least eighteen years of age to be able to perform the job she was doing.  Because she was doing an outstanding job, they agreed to move her to the floor of the warehouse where she still worked as a riveter. For the next four years Louise worked the second shift of this important job.

Coincidentally, Louise found another young woman also named, Louise to be her roommate in a nearby boarding house.   The two Louise’s enjoyed their newfound freedom as they explored the city and all the places of interest around Wichita.  It was out on the town where Louise Ellis met a handsome service man named, Jim Haile who made this exciting adventure even more pleasurable.

Finally, the war was over.  The Country collectively cheered at the announcement.  The employees at Boeing stampeded like a herd of cattle released from a holding pen as they exited the grounds and headed for home.

In a few weeks, Jim found his way to the hills of Arkansas to find his love.  The couple would later marry and move back to Wichita where they raised their four children.

Our family is so proud of my aunt, Louise Ellis Haile, for being one of the important brave women known as, “Rosie the Riveter.” In today’s world of superheroes and action figures, our family has a real life “She-roe.”  Today this vivacious soon to be ninety-six-year-old lady resides at home in Sebring, Florida with her children.